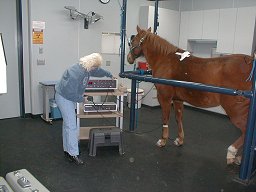 Electro-Acuscope/Myopulse System - known to health care professionals for two decades is available for the veterinary industry. Specially modified to meet the electrical potentials of large and small animals, it has placed itself as a forerunner in the industry. Technologically designed to withstand time, this system sets the pace in the field of therapy. Used in treatment for horses and small animals over the last decade, it has proven itself in the treatment of a wide variety of conditions commonly affecting horses and small animals participating in every area of competition. Many top owners, trainers and riders are discovering the benefits of Electro-Acuscope Therapy, which works efficiently and without side effects.

In order to adequately explain how the Acuscope works, it is appropriate to begin by considering certain fundamental aspects of living tissue. The body is made up of a vast number of cells. In many ways, these cells act like tiny car batteries, storing and releasing energy, doing their work of taking in nutrients, releasing waste products, repairing and reproducing themselves, etc. Each cell, like any battery, has a measurable electrical charge which must be maintained in order to function properly. 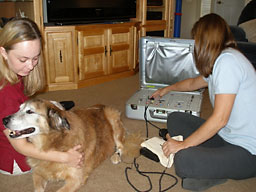 Energy flows constantly between all cells throughout the electrical circuitry of the body. When damage or trauma occurs to living tissue, there is a disruption in the electrical capacity of the involved cells and after an initial surge, there results a measurable decrease in the production and flow of energy through the electrical network of the involved tissues. This condition is generally accompanied by pain in the area and often results in the body's inability to completely repair itself. Thus, lengthy rest periods and inactivity are often prescribed in order to attain eventual restoration of normal function.

At this point, the Acuscope is frequently introduced. The treatment has been likened to putting a "jump start" on the dead battery of a car. Since the instrument has both feedback and therapeutic functions, it actually provides auditory and numerical readouts which indicate the locations where tissue is damaged and unhealthy. Once abnormal areas are located, the Acuscope can then treat the tissue according to its needs.

An experienced therapist can interpret the sounds and numbers which reflect the amount of conductivity passing through the tissue between treatment probes and can determine a course of therapy based upon these readings. Swelling and inflammation are translated into high numbers on an LED display along with corresponding high-pitched tones. The Acuscope readings tell the therapist where the problem is most severe; it can pinpoint precise areas of excessive heat and fluid in acutely damaged sites. It can also identify tissue that has become chronic, i.e., an area of deficiency in an energy-depleted state. Low numbers and tones reflect tissue which is unable to complete the healing process and incapable of returning to a normal, healthy condition without assistance. In addition, the Acuscope can help locate problem areas in other parts of the body which have become sore or painful as a result of compensating for the original cause.

People have interpreted the results of Acuscope Therapy saying: "The Acuscope healed..." this or that condition. The fact, of course, is that the Acuscope does not heal, rather, it assists the body in healing itself by improving the circulation of blood and oxygen in the involved area and normalizing the electrical circuitry in the nerves and muscles of damaged tissue. 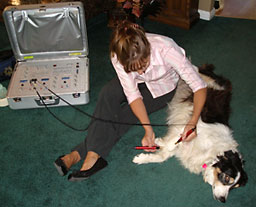 Acuscope Therapy is a modality applied primarily for pain relief, to improve soft tissue function, and to increase range of motion. The Acuscope differs from other electrical stimulation devices in that it delivers its treatment in micro-amps. Most nerve stimulation devices (ordinary TENS) produce milliamperage current designed to bombard the tissue and simply block pain signals from reaching the brain. The Acuscope, in contrast, generates only the level of current required to gently encourage nerve and muscle fiber to return to conduction of normal electrical impulses. In contrast also, ordinary TENS devices provide only temporary relief, whereas a series of Acuscope treatments has a cumulative, long-term healing effect.

In numerous scientific studies, microcurrent stimulation had been proven to have a profoundly beneficial effect on living tissue. Microamperage (below 1 millamp) is the naturally occurring level of current generated by cells throughout the body. In technical terms, some of the benefits of microcurrent stimulation at the cellular level are: opening of voltage-sensitive calcium ion channels, normalizing cell membrane potential, restoring the sodium pump function, enhancing protein synthesis, and increasing ATP production (Ngok Cheng, et al: 1976) With this in mind, it is easy to understand why supplying the kind of current naturally occurring in healthy tissue promotes regenerative metabolic activity.

Another unique feature, which sets the Acuscope apart from other electrical stimulation devices, is the micro-chip circuitry that is designed to scan and monitor the tissue. Other electrical stimulation units (milli- and micro-amperage alike) gather no feedback and produce only a simple fixed output according to preset specifications. The Acuscope reads neurological impedance (resistance) in the circuit created through the tissue placed between the two probes. Based on the information it gathers, the unit is programmed to calculate appropriate corrective waveforms. 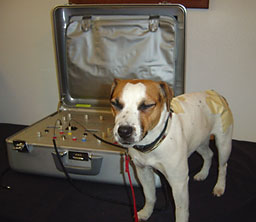 Acuscopes used on horses and small animals are specially calibrated to take into account their level of conductivity which is higher than Humans. Computerized circuitry picks up abnormalities in nerve fiber impulses (input) and modifies its infinitely variable square wave signal (output) appropriately. Its self-correcting mechanisms continually adjust the current until normal patterns are being conducted without resistance through the tissue between the probes. The readings then tell the therapist when an area has been successfully treated and then the probes can be moved to another location. This feedback modulated procedure eliminates the possibility of overtreatment or harm to the tissue.

Therapy sessions can take from 10 to 30 minutes, depending on how many areas are treated. Most areas take an average of 15 minutes to treat, but a complicated condition with several areas of involvement requiring a variety of applications may take longer.

Remarkably, results can be noticeable immediately, with continued improvement over the next few days. Within a week, most conditions will have progressed dramatically. Chronic conditions may take several treatments before initial results are observed; yet Acuscope treatment is known to resolve serious conditions which would otherwise never improve. Enhanced alertness, calmness, definite changes in gait, coordination, and balance are typically some of the immediate results along with the reduction of pain, swelling and relief from muscle tightness.

Chronic conditions may be maintained for a long period of time with the help of Acuscope Therapy, and preventative maintenance is also possible with the use of the Acuscope. Electro-Acuscope Therapy complements traditional veterinary procedures to ensure a quicker recovery for the animal, and is becoming well-known as a highly respected form of therapy.

For more detailed information on the Electro-Acuscope/Myopulse Therapy System, please see the FAQ section or refer to each model specifically.

Please feel free to view some of the case studies and testimonials from Veterinarians, Animal Therapists, Trainers and Owners of Dogs, Cats, Horses and other small and large animals needing rehabilitation and pain relief with this remarkable therapy .